My Involvement in this group art show is by no way an endorsement in any way of the occupying of pants.

Occupy your Pants! The Stellar Roster of Talent unveiled…
Drifted and Wicked Present: Occupy Your Pants!
November 25th at 8PM!

Stellar art from 14 Artists from around the US, Catered by Yosake and Satellite Bar & Lounge!

Hailing out of San Diego, Shay’s ability to combine life’s little realities with his intense imagination translates his amazing oil work into content that captures the collector’s emotions and visually mesmerizes the art community no matter what coast or country it shows in. Shay has been shown in renowned galleries worldwide and featured in many of the top art magazines like Juxatapoz, High Fructose and Stupid Mammals. He’s collected by the famous and adored by the masses alike. http://www.shayvision.com

Wilmington’s star artist who has now captured the attention and hearts of millions across the globe. It takes one moment, just a glance, to succumb to the childlike vision that stirs emotions and memories in us long forgotten. Gabriel paints things that were so much bigger than us at a time when the world was full of amazement and wonder and returns us to the love and innocence we once had. http://www.gabrielart.com

Accomplished artist from Philadelphia having studied at the Pennsylvania Academy of Fine Arts brings a twist to illustration and design in the most fabulous surrealistic sense! Working closely on the Alice Project with NOTLD Reanimated brought us to this true genius of the pen, graphic illustration and every medium imaginable! http://davidwtripp.com/home.html

Abuelito Romo lives a rich life of history and culture. Her Mexican traditions and reproduction of its heritage in sculpture, paint, design, clothing and tales has become iconic in her now hometown of Tucson, Arizona as well as the left coast and South America. She is wise with the magic of the centuries which translates into every hand crafted piece that has ever surfaced. http://www.april-romo-de-vivar.com

New Orlean’s son. Leveeland Creations is the child of home-made, hand-painted Naive Folk Artist Varg. He works in salvaged wood and found objects from the gutted homes that fell victim to Katrina. This all thanks to the Green Projects & Habitat Restore where pieces of Katrina’s destruction can be fpund to produce upcycled, impressive, nostalgic art. Every piece is abundant with the character and the lush, vibrant mannerisms of NOLA. http://www.leveeland.com

Wilmington’s Candy Pegram has captured the hearts of the masses with her unique style of Naive Folk Art works blended with her amazing ability to distress anything when armed with her trusty sander. Her stand out images brought out with bold outlines and semblances of pop culture down to the simplicity of childhood toys and characters make irregularity a perfection! https://www.facebook.com/candy.pegram?sk=wall

Versed in the street , JP originally from the NYC, brings his spin on it’s urban flare from Brooklyn, Long Island, Manhatten, Bronx and Queens to Wilmington. Over the years JP has belonged to many talented crews.. 9 to be exact. His work has been published, produced in turn for clothing lines, shoes and burned on the walls and in the eyes of city we live in! Master of his craft, unparalleled. https://www.facebook.com/pages/EYEDEE-JProductions/96231490212

This non assuming gentleman with the magnificent beard may be the hardest working man in his industry. Not only does he tattoo at Artfuel but runs proxy media design, graphics, web by night. He is the super hero of art. You may have noticed his tattoo work around town that puts a satyrical twist on “Traditional Work” tattooing, which he also translates comedically and eloquently into his paintings. http://artfuelinc.com/luke-worley/

Sam express his views of the human animal through anatomical and emotional symbolism. Skeletal, Nude forms, Sexuality, Death, Religion and Mortality are brought to focus through classical influences and in most cases the ornate dark and macabre! He is the master of emotion and skilled at revealing the secrets of beast in all of us. https://www.facebook.com/samguinartist?sk=info

Prolific artist as well as tattooer that moves gracefully through many styles and mediums like it was second nature. Sarah owns and operates out of the famous Artfuel Tattoo in beautiful Wilmington, NC and is a face and name in the art and tattoo industry throughout the world. http://artfuelinc.com/sarah-peacock/

Douglas Bucci is a designer and educator in the field of jewelry and metalsmithing! Bucci views his process as one that allows for a creative freedom unfound in traditional hand-made jewelry methods. Bucci’s work has appeared in multiple periodicals & texts and is an educator in his field as well as a designer for many national companies. http://www.dougbucci.com

Wicked owner and manipulator of the obvious, who artistically exposes the vulnerabilities of the psyche. www.onewickedgallery.com 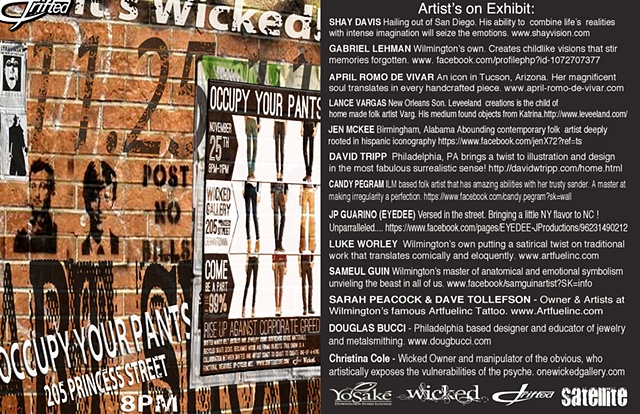